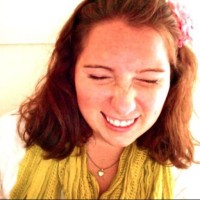 A Guide to Having the Best Vagina in Town [Friday Faves]

There's been a growing trend in the vag-o-sphere. And it's all about making your lady parts look pretty and shiny and....bedazzled?! Yes. Bedazzled.

Hey girl, how's it going? Haven't seen you in a while. I know we've both started the whole "we're too old to be dancing on tables and taking body shots" thing, but I was thinking about the good ol' days and was hoping you'd reminisce with me.

5 Mistakes We All Make When Dating a New Guy

As most of you know, I'm kind of a pro when it comes to dating (online, offline, coffee shop...you name it, I've been there and most likely done it).

A Love Letter to My iPad

I never knew what I was missing in life until I found you. The ease in which I can search for things, write scholarly articles, and watch reality TV amazes me.

The Weekly Ten: Laugh a Little

I bought a day-by-day calendar all about being assertive and basically saying "No, thank you" more (but without the 'thank you' part). And by "assertive," I mean it's filled with hysterical quotes about how it's okay to be super-bitchy, because we all have those day/moments/weeks/lifetimes...when we need to insert an extra NO! into one thing or another.

As a New Englander you would think I would be one of the many supporters of winter. After all, I used to figure skate and bring my inner tube to the Seven Hills, but somewhere (I blame junior year of college; not sure why) I turned. Maybe it was when I fell in love with all the wonderful things summer had to offer, maybe it was when winter started taking over half of the year.

The Weekly Ten: Best Movies for a Snugglefest

I know a thing or two about snuggling, mostly learned from John Stamos...but I digress. There is nothing more complimentary to a good snuggle then a great movie. So here are some movies that will have you jonesin' for another snow storm...

As someone with a strong addiction to anything hot and caffeinated (*cough* Ryan Gosling sipping coffee in his château *cough*), I'm positive I have found the best combination of drinks to not only warm your hands, toes...all extremities, but also one that will make you feel cozy inside.

Yeah, we've all been there. And we all know resolutions last about three weeks in. It's not your fault, it's hard to stick to change...especially a lot of drastic changes. So, to put you on the path to resolution success here are ten ideas that will not only guarantee a positive outcome, but also make you feel a tad better about yourself. Plus, who can say that they actually followed through with their New Year's Resolution?

The Best Top Ten Lists You Read This Year

While we're looking back at all the wonderful moments (and the not so wonderful ones, i.e. that time you threw up in your new boyfriend's bed) here are a few articles that made my year just a smidgen better. I know for a fact after reading them you'll feel ten thousand times better about all of your not-so-great moments of 2011.

I love giving presents. I love the face people make when opening up the specifically picked gift, hearing the sounds of the wrapping paper tearing. I love the hugs and thank yous, the 'Oh my god! You totally shouldn't have (but I'm secretly really really glad you did)'s. However, I hate the process you need to take to get there.

As a December baby (December 28th to be exact, yes I do now expect you to send me lots of presents) you would think I would be a fan of snow, or at least of winter. But I am not, and I will tell you why.

The Weekly Ten: Reasons Why I Don't Want Kids

I'm not sure if I mentioned it before, but I'm currently a nanny to an adorable (when sleeping) four-month old baby boy. Before taking this job, two and half months ago, I thought I wanted kids. I now realize I do not want kids, at least not for a really really (huge emphasis on really here) long time.