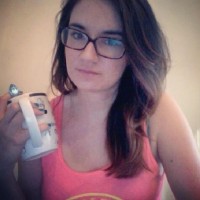 Finally, the last week of my challenge. I never thought I'd get here without sneaking around UrbanOutfitters.com at midnight to get my window shopping fix (Okay, so maybe I did it once. Or twice.), but here I am. And surprisingly, I'm not counting down until 11:59pm, April 30th with my credit card in my hand.

This week has been 127 times better than last, shopping wise. I've been so busy that there hasn't been much time to dig through F21's new daily arrivals. Not shopping wise though, stress has been killing me. Exams, term papers, projects... I don't even see my boyfriend anymore. And I live with him!

So because of a recent underwear purge (I estimate I have about 60 pairs), I found myself needing some nude n0-show undies for an ivory dress my mom bought me over Spring Break. What started as an innocent visit to VS.com for one $10 thong turned into a $250 shopping bag that won't stop staring at me.

While I won't be jet-setting off to Vegas or Cabo (sighhh) for a week of pool-side margaritas this year, I will be vicariously living through my friends that are. And knowing them, they'll be out on the beach the whole week, causing trouble, and meeting some definite characters.

Eating Disorders: How To Help a Friend in Need

Here at CollegeCandy, we've discussed and confronted body issues many-a-times. Whether its about the downfall of too-skinny models, or the recent obsession of using plus-sized models for "contrast", these articles always incite heated debate. Even posts unrelated to the subject get pulled into the fire!

While many view the traditional MTV Spring Break as an essential, critical, and irreplaceable college experience, lately girls have been unpacking their bikinis and trading them in for work boots all in the name of Haiti.

I love everything about Mardi Gras. It's one of those days that makes day-drinking on a Tuesday completely acceptable and encourages us to eat the most disgustingly greasy (read: most delicious) food that we can. Whether or not you participate in the religious side of the event, we can all agree that a day dedicated solely to partying and indulgence is heaven sent.

After the nail-biter championship game last Sunday, the Super Bowl will be sure to not disappoint. Drew Brees and the New Orleans Saints beat out Brett Favre's Green Bay Packers Minnesota Vikings in overtime to become the NFC champions and move on to face Peyton Manning and the Indianapolis Colts.

Confessions of a College Cocktail Waitress

Giving up my nights out was not something I was especially prepared to do when I started scouring my college town for a job; who wants to be folding clothes amidst an asthma-inducing Abercrombie cologne cloud late into the evening when your girls are out at $1 pitcher night? Nobody. That's why I became a cocktail waitress.

As a student at a Big Ten school, football has become my soul purpose in life. From crackin' the first beer in the shower at 6am on game day to FB-stalking the quarterback (shhh!), my world revolves around a bunch of dudes in spandex tackling each other on some astro turf.