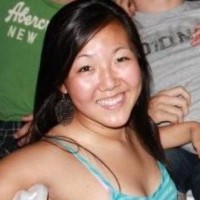 “So then I went back to his suite with him. And we bumped into his friends, and he introduced me, and they were all ‘Nice to meet you,’ in that douchey voice that actually means ‘Ah, you’re getting it on with our boy tonight.” I don’t even know his friends, and they probably think I’m a slut because he told them I’m a slut! Whatever, then we went back and hooked up. And it was decent, I guess.”

The Starting Line: This Freshman Won't Sing The Winter Blues

It’s blizzard season, y’all! Every state in the US besides Florida has had snow in the past few days. My friends in South Carolina and Georgia have been snow dayin' it like crazy due to the rare 7 inches of snow that has fallen. Meanwhile, up here in Connecticut, there is no such thing as a snow day and I’ve been getting stuck and then face planting in snowbanks on my way to class.

Considering that my last post looked back and cleared the slate for me to realize that my life has finally moved on past high school, it's time to look ahead. And there's no time like the present (with NYE looming ever so closely) to take everything I've learned this year and use it to change myself for the better.

The Starting Line: Taking Myself Seriously

I’ve decided recently, while lying naked in my bed after a shower (try it—it might just be the greatest thing about being home) that this break is 5% nostalgia, 25% catching some Z’s, 20% eating and 50% flat out weird.

The Starting Line: A College Education

Candy canes, hot chocolate and crowded libraries, they’re all synonymous with one thing--finals season is in the air (or for some at least, it’s already done with and they’re busy tanning their backsides in Barbados). Between writing papers (ew) and eating so much junk food that Cheetos dust is running through my bloodstream, I’ve had some time to reflect over semester one of my college experience.

The Starting Line: Where is my Chicken Soup?

The air is crisp, the dorms are abuzz with “I’m going home!” and my suitemate and I are—feverish. Literally.

Amidst naked trees, pee on the toilet seat, and icy treks from the shower to the dorm room, the happy charm of college is beginning to wear thin. Right now, I just want to go home and watch Desperate Housewives with my mom and not wear flip-flops in the shower! Ah, such are the woes of homesickness.

I am sort of floundering right now. I mean, high school was easy. All throughout high school, I had one goal: Get into a good college. I knew I had to turn in my homework, to get A’s on tests, to play sports, take on leadership positions, etc. Everything I did, I did with the idea of, will this help me get into college? But now, I have no idea what I should be doing.

The whiteboard outside the door, I’ve realized, is a classic college staple. It’s as college as 3 AM bedtimes, as shower shoes, as James Franco (fun fact: James Franco and I exchanged heys on campus last week). It’s soooooo college. Fortunately enough, the whiteboard outside my suite’s door right now reads this: “HALLOWEEK 2010: Let your inner Heidi Klum out...that chick’s a Halloweenoholic.”

So I'm new at this whole midterms thing. The idea that I've been more or less lounging around for the past 6 weeks and then - wham! - I'm hit with a test that's worth 40% of my grade...that's kind of crazy.

Okay, so I am completely not a hippie. Let me just get that out there. Incense makes me sneeze, middle-of-the-forehead headbands make me look like an awkward boy and I own nothing made of hemp.

The Starting Line: Label-less Me

In high school, I had a clear label. I was Ms. Student Government, Ms. Good Grades, Ms. Overachiever. And even though all of our years of primary schooling have told us that labels are totally, totally terrible and that we should define people by their true selves and inner lights, etcetera, Oprah wisdom, etcetera...

Entering the dining hall at my college was like entering the land of some kind of lotus-eating, vegetarian haven, or, in my case, a carnivore’s personal version of hell. It’s not that they don’t serve meat; they do. But they also serve various other reinterpretations of meat: tofu ravioli, lentil hamburgers, vegan minestrone soup.