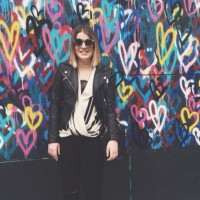 While she may be best known for earning her wings as a Victoria’s Secret Angel and strutting runways as an...

15 Beauty Mistakes You Didn’t Know You Were Making

ICYMI, sleeping in your makeup is a big no-no.

Bored of off-the-shoulder tops already? This one's for you.

If you don't have one, now's the time to get one.

Don't sweat it -- we got you covered.

We know, we know, you’ve probably heard it over and over again from your friends when they returned from their...

Kylie Jenner Loves This Trend – And You Will Too

It’s no secret that fashion-wise, a ’90s revival is in full force. From chokers, to overalls, to brown lipstick, the...

This calls for a mani/pedi.

According To Spring’s Ad Campaigns, Diversity In Fashion Still Has A Long Way To Go

Of the 422 models that appeared in advertisements, only six were over a size 12.